Humane Aware aims to contribute to policy discussions around animal welfare by bringing a social science analysis to the debate. Find our reports and publications here. 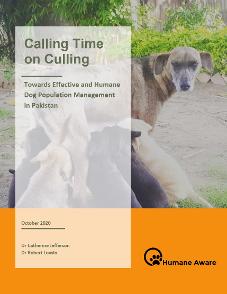 Effective management of free roaming dog populations is a global challenge with significant implications for public health as well as animal welfare. Numerous studies demonstrate that dog population management that is centred on a strategy of vaccination, sterilisation and public engagement is the most effective and humane intervention available. Despite this, culling practices remain common in several countries, including Pakistan. This report examines local efforts towards vaccination and sterilisation programmes in a number of regions of Pakistan; it explores the challenges that exist in the implementation of humane and effective dog population management; and concludes by highlighting a number of key themes that have emerged. Read the full report here. 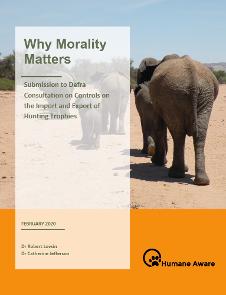 Trophy Hunting and the Import Ban

Public discourse around trophy hunting has intensified the past few years since the 2015 killing of Cecil the lion in Hwange National Park in Zimbabwe. Furthermore, several countries, including the United States, Australia, France and the Netherlands have enacted legislation designed to restrict or ban the importation of hunting trophies from certain species. This, together with other decisions, appears to have amplified a complex and controversial debate around the role of trophy hunting in conservation.

Read our submission to the Defra consultation on controls on the import and export of hunting trophies here.